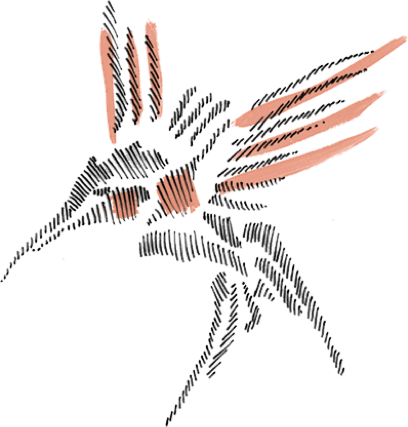 Hi, I’m Anna Gamburg. I’m a speaker and actress for Movies, TV and advertisements. Dubbing video games is also a key element on my list. Whilst working, I mostly enjoy expressing emotions. To add an appealing touch to commercials, to bring cartoons to life; that’s the kind of stuff that motivates me. That’s not all though: I want to be recognized as an actress as well. What I absolutely love privately as well as professionally is playing Improv theatre with my super talented fellow actors and actresses. (https://www.scratchtheater.com)

I love it the most when my jobs also give me the opportunity to contribute my own ideas, to create rather than to just participate. Of course, I can follow strict requirements as well. The most important thing to me is to have fun and add a feeling of ease to the work I am doing – a mindset I believe works to the benefit of all.

How I got my first assignment

I have previously worked for Google, Microsoft and Amazon. Further clients of mine are Deichmann, Tschibo, Ikea, Nikon, Edeka, Weight Watchers and McFit. Some other credentials are jobs for Lidl, Zalando and Deutsche Telekom.

Of course, all of this didn’t just appear out fo nowhere. I studied Media, Communication and Cultural Studies in Newcastle, England, and worked incredibly hard to start my career. What interested me most was exercised media, which is why I wrote my thesis on advertisement strategies and how they affect the audience. What I found to be crucial, was the positive effect of humour on the perception of the ads. If you induce just the right amount of fun, in time that’ll help to achieve a positive attitude towards almost anything that is being promoted.

While doing an internship at the Hannover local radio station Radio Leinehertz, I was given the opportunity to present the Morning Show, which in turn led me to the conclusion, that my voice was an actual career chance for me. After a variety of workshops, single-handed studying and speaker coachings, I was assigned my first jobs for voice acting and advertisements. My first big job was an commercial for Fanta Klassik – a brand of the Coca Cola Company, which is mainly marketed in germanophone areas.

I don’t let myself be labeled or limited to certain styles or distinct jobs. I love to put my voice to use in all kinds of ways. I like to play around and experiment, doing impersonations of characters, playing with my voice range and quality. I do not aim to neglect the “salesman type” of promotion, however I do prefer to skip compartmentalization and generalized attitudes for my own accentuations – not only figuratively: I am articulate and fluent in six languages. German and Russian are my mother tongues. I’m also often mistaken for an English native speaker as well. Furthermore, I can hold conversations eloquently in Spanish, Portuguese and French. I speak these languages pretty much accent-free - and can easily immitate foreign accents in German and English (German with a Russian Accent, or a Spanish one for example.). I think because of my musical abilities, I have a natural talent for pronounciation and emphasis.

I like to transport feelings and atmospheres, to endorse those in listeners. I want them to feel captivated and comfortable listening to my voice. It’s supposed to carry them along and maybe teach them something in doing so.

I would like them to like me. If they think my voice sounds pleasant, no matter what they’re doing, that’s when they’re the most likely to be wanting to listen. This is what I think a good VO artist is supposed to do. To appeal to listeners with the content and presentation of what is being said – without being an annoiance, something that bothers or strikes as needy. Naturally, I’m critical of an excessive cooperative society. I don’t want to impose stuff on anyone. So it’s only half the story that I think my job is supposed to be enjoyable to myself – I prefer doing it for labels and things that I personally stand behind.

Through dubbing in some much-noticed productions I was able to attract more jobs as a voice actress, including major roles in The Man Who Killed Don Quixote, Slenderman, The Handmaid's Tale, as well as Riverdale.

The pitch of my voice is rather high in comparison but has a rough note to it. It can, however, also sound deep and soft. It sounds enthusiastic, heartful, and it’s hard to miss my readiness to experiment with it. My vibrance and my being open to what’s new to me can be heard and felt. I can sound convincing and convince soundly. I’m able to reach intense levels of hight, which is why I’m able to play childfully-naive roles and weird comic voices that sound prickly and exalted. I can carry someone along euphorically, empathize or deliver hard facts in an objective mannar. I can present even demanding topics in a way that can easily be grasped. Whispered softly, lasciviously, warm, eclectic and vivid. I speak with the courage to go my own way. During all of this, I focus on being positively understandable. With a lot of curiosity and readiness to learn new things I use my voice dynamically. As mentioned before: I’ll give my everything to get actual emotions across. Oh: And I love singing.

The love and passion I bear for my job derive from the versatility and the broadness of it. I like to present, speak for advertisements, dub and act on a rotating basis which keeps constantly on my toes and interested in all those wonderful things. Most of all, I enjoy speaking in accents and dubbing cartoons. Especially the exaggerated ways of speaking, which one would never use in everyday life, is so much fun. Furthermore, I cherish the contacts with all the beautiful and talented actors across the globe, creating friendships that last not only professionally but also privately. Other actors and speakers I admire are Sarah Alles, Maja Maneiro, Charlize Theron, Natalie Portman and Anne Hathaway.

My dream? To be the main characters voice in a major Pixar production.

When I am working, I stay focused with persistence and power. Curiosity and fun whilst speaking are my mainspring. It comes easy to me, to speak just as you wish me to. I’m flexible, precise and reliable. I can record at home and can send it to you without fuss. You’ll have all the professional home studio audio recordings ready to download within a maximum of two working days if I record alone, otherwise you can simply listen in and direct my while we record together. My equipment is a Neuman TLM 103 microphone, Presonus AudioBox Interface and Pro Tools 12 software.

My approach to work is pragmatic: in the end, what matters to me is what matters solely: the emotions behind the words.

What about me privately?

I’m highly energetic, full of thurst for action and ever moving. Starting in my early childhood - born in Russia moved to Germany when I was 3, I played the piano and danced ballet. Later on, I went on to dance Hiphop, Ballroom dances and Tango. Sports, especially dancing, are an essential part to my life. Because of my short height, I’ve gotten used to present myself in a boasting manner that says I don’t mind speaking up for myself. It’s easy to find labels and prejudices for short women, which is something I reject. I stand up for my opinions. I’m focused, engaged and autonomous.  I’m overall a very cheery, curious person who is always up for having a good time.

Personally, I enjoy photography, theatre, dancing and connecting with other people. Lately, I’m thrilled about topics such as personal development and self-love. Yoga, reflection of self, good conversations and childish curiosity are my constant companions.

My friends like about me that I’m honest and authentic and spread a good mood everywhere I go.

What I aim at

For the future, I would love to focus more on acting. I enjoy playing in theatre productions just as much as acting in movies. What voice acting sometimes lacks are the multiple facettes acting allows. Facial expressions, the tales that eyes can tell, visual language, motion, the noise of silence. This is why I started writing and producing my own movies and tv shows.

For the contest Self Made Shorties I wrote, porduced and starred in my short film „Murphy’s Love“ in 2019.

I want to create. My joy lies in putting things into existence. Therefore, I’m up for all sorts of projects, including dance-, film- or photography projects, to apps, audio books or video games.
I’m freelancing for voice and movie acting as well as dubbing based in Berlin, but love travelling and getting to know other places.

I’m delighted if you want to contact me. You can do so here! Feel free to visit my Instagram and IMDb pages!